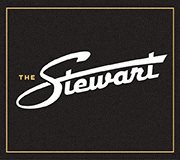 The Stewart apartments have risen from an iconic property with deep rooted history in Downtown Phoenix. The site was originally a Studebaker car dealership in 1947, owned by the Stewart family, whom today's building is named after. The current building incorporates many architectural details from the original building, including the showroom turntable, where Studebaker cars were displayed and rotated in the semi-circular window. In the 1970s, the location became known for its musical resident, Circle Records. The music store was in business for 25+ years and became embedded in the fabric of Roosevelt Row. We paid homage to this legacy and the impact that the store had on the area, naming our unique floor plans after various musicians that you would have listened to in this spot.

With its blend of historic and modern touches, extensive amenities, and claim to fame as the tallest residential building on Roosevelt Row, The Stewart will provide a distinctive lifestyle experience and create its own legacy in dynamic downtown Phoenix.